So[1] I was surfing ROKU and decided to check-in on its YouTube channel. Here I was presented, as my number one suggested video, the following offering by none other than my ol’ cyber-fiend Kyle. I had fourteen minutes to spare so I donated them to "Kyle Hester Land."
Might I suggest you do the same:

The following is reprinted from this video's YouTube page:
https://youtu.be/fVG-uCZzRfc

Welcome to Kyle's Film Garage! Todays video is about a passion of mine. Archery!! I will be doing a speed test on my Hungarian Horse bow. Lets shoot this bow and arrow through some stuff to see how powerful a horse bow is!
You may know me from such films as Zombie With a Shotgun or The Chair horror film with Roddy Piper.
My goal here is to make solar powered films.
Please join my patreon to be a part of the magic. This is the way to keep independent film alive! I will share behind the scenes stuff that you will only find there!
https://www.patreon.com/kylehesteractguy...

You can also support independent film by watching on Amazon and leaving an awesome review. It all helps with the algorithm!
You can check out Zombie With a Shotgun below. I play a bounty hunter in NewYork City.
https://www.amazon.com/Zombie-Shotgun...

If you like dark psychological horror then check out
The Chair! Starring Roddy Piper
I play a sadistic prison guard along side Zach Galligan and Noah Hathaway.
https://www.amazon.com/Chair-Roddy-Pi...

These films are possible because of fan funding!! It would not be possible without you. Thank you for supporting independent film!!! 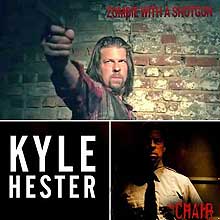 [aside #1: is it even proper to begin a sentence with the word "so?" - I don't think SO - that is like starting to like drive me like crazy... LET'S STOP IT PEOPLE!]