Boyle, Co. Roscommon - an ordinary small town in the west of Ireland has become widely known as a "Hotspot" of UFO activity. Pete Higgins claims that as a child growing up in Boyle, "I never even caught a glimpse of any mysterious objects." Follow with him now as he presents "an open minded glimpse into the notion of belief and skepticism in a small Irish Community.*"

UFO from Pete Higgins on Vimeo. 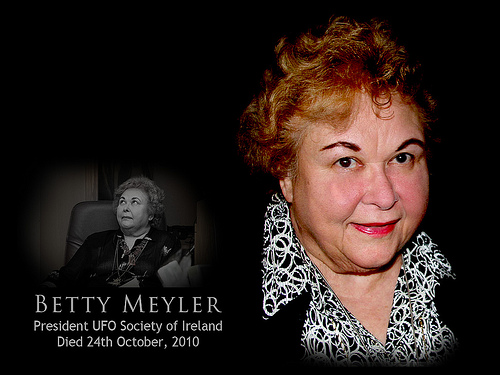 Betty Meyler, President of the UFO Society of Ireland died recently. Betty believed passionately in UFO and extra-terrestrial activity. She recorded the many sightings by people in her home area, Boyle, Co. Roscommon, Ireland and further afield as well as presenting them on this website.
• Betty's friend and UFO enthusiast Carl Nally and a local committee will continue the work initiated by Betty including an expansion of the role her website can play. Details will follow.

UFO SOCIETY IRELAND - Highlight from Newsletter No.113 (Feb.09) - Betty: "I was interviewed by Peter Higgins and a crew from the University of Galway - they are doing Media Studies there and were making a documentary about the whole UFO scene in Boyle - again we went out on the Lake and were able to find the Portal again."