In searching out some digitized text from "War and Peace" by Leo Tolstoy to insert into an article I was working on over at The Vestibule I was rewarded with the complete volume of the work. This exercise also served to introduce a very interesting, international, collaborative project between individuals in the United States of America and Russia and the Newly Independent States: Friends & Partners. 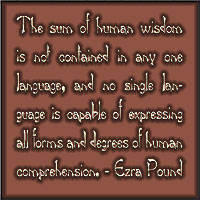 The website is certainly dated and its home page serves to celebrate the sites 20th anniversary (which occurred January 19, 2014.) It is unfortunate that this (obviously monumental) labor of love has stagnated in its development. However, it is found none-the-less worthy of those glowing rays of attention bestowed by the BlogDogIt Spotlight.

As luck would have it we have made our discovery in time to congratulate this web service on 25 years of contribution to the world wide body of knowledge.

Born on January 19, 1994, Friends and Partners is one of the first Internet services developed jointly by citizens of the United States and Russia. Resulting from a chance meeting on the Internet (you can read our story here), it is but one of many examples of how the Internet, itself rooted in the Cold War separating our nations, can provide an effective means of bringing us together.

About the authors . . . We are Natasha Bulashova, of Pushchino Russia, and Greg Cole of Knoxville, Tennessee, USA. Our careers in information science led to our chance meeting via the Internet and to our discovery that despite cultural differences, a steep language barrier, and the misunderstandings upon which we were raised, we can become good friends. It is our greatest hope that this server will help others do the same.

Please Note: Many of the links offered on the Friends & Partners web site are broken due to age and attrition but a great deal of valuable resources and entertaining content are still available to those willing to do a bit of cyber-exploration (you know who you are.)