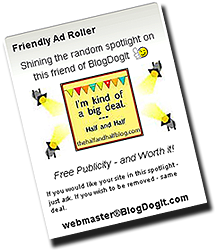 Thanks to the BlogDogIt Friendly Ad Roller ™ I was reminded of Half and Half, the blog and brainchild of "half wit. half wisdom. a whole lot of nonsense."® Megan Lake (A.K.A. @meg_lago to her twits.) When her linky popped up randomly today I took the bait and decided to visit one of my preferred internet destinations.

I have to admit to disappointment however, when I discovered there had not been an entry made since two-nought-sixteen. Not exactly the end of the world because there is plenty of prose from her prolific pen - enough to profit even persistent perusers such as myself. 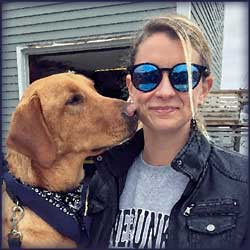 Wondering what Meg was up to nowadays, I flew on over to twitter to check for life-signs. Encouraged to find tweets originating from within a fortnight I decided to explore some more and saw she was now listing her internet address as MeganKLake.com It was through this website I learned rather than abandoning her creative side she had instead put it to great effect as Senior Copywriter for the prestigious AMP Agency in Boston.

An investigation of the portfolio presented on her new website reveiled a somewhat less wry application of Meg-arts but I found it to be an enjoyable look into the future of Meg Lago's past. So it turns out that around the time she was walking away from the Half and Half she was walking into the World of Play-Doh. In typical BlogDogIt form I would like to wish Play-Doh an extreemly belated but sincere Happy 60th Anniversary and officialy / finally join in the celebration of "World Play-Doh Day!" (September 16)

Watch the following video short and tell me honestly you did not see this in Meg's Future ;)

Play-Doh tasked us with generating buzz around World Play-Doh Day. We interviewed kids from all over the world and asked them what they thought the future would look like, then we created it in Play-Doh, wrote a cohesive story and launched it on the brand’s 60th anniversary on September 16, 2016.

You never know what the future may hold; these kids may actually have it right. That Megan kid certainly did.