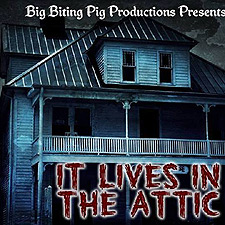 It is always great fun to see what the good folks at Big Biting Pig Productions have unleashed upon the world with each of their annual horror productions. This year's release is their tenth movie to date. Written, directed and staring Steve Hudgins, it is titled "It Lives In The Attic" and perhaps the scariest thing about this film is that it ever lived in the mind of Steve Hudgins. You know what they say... better out than in. Oh, really? 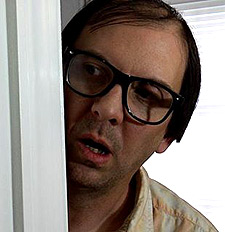 The pre-release trailers for this film did little to reveal any more about what to expect than does the film's title; this signaled to me that the actual story line was being held close to the vest. Wishing not to take away from that spirit of mystery, a thorough review of this film is going to be little tough to do. I will say however, that it was fantastic to see Michael Coon in a leading role, all grown up and enjoying life as happy-go-lucky Andy. It was also good to see that Jessica Leonard was none the worse for wear; coming from her starring role in last years Big Biting Pig monster hit, to figure voluptuously into this tapestry of madness as Ellie, the girl next door. Steve Hudgins channeled his inner "Aqualung" in a masterful "perv"formance as the standoffish Barney. 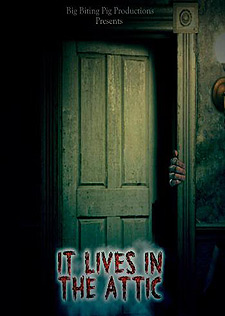 I really don't think it is much of a stretch to say this production has crossed the line into a soft-porn classification but you may rest assured the horror is there in ample quantity to spoil the mood. Many familiar Big Biting Pig performers contribute admirably to the film and a good many of these seemed just a little too convincing when letting their freak flags fly.

Disturbing? Yes. Uncomfortable? Yes. Horrific? Oh, yeah! Honestly, I came away from this film with much the same feeling as after having first viewed Stanley Kubrick's classic "A Clockwork Orange." In fact, to my mind, I think of this as Big Biting Pig's "A Cuckoo-Clockwork Orange" (I mean this in a good way.) Steve Hudgins and the Big Biting Pig crew always seems to bring us smart, thinking-person's horror, so you will want to bring your brain; of course it will be of no great help with this one, but you will still want to refer back to it as the closing credits begin to roll.