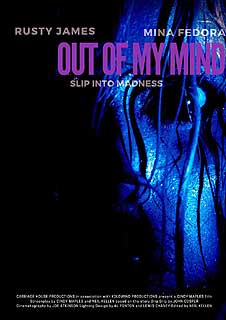 A brand new vehicle has been added to the Carriage House Productions stable of creative independent cinema (in association with Koldwind Productions.) Director Cindy Maples gets her creative juices flowing to the point of "dripping" in this, her latest film project.

"Out of my Mind" is a mysterious little thriller based on the story "Drip Drip" written by John Cosper. The screenplay/adaptation was a collaboration between Cindy Maples and Neil Kellen and found it's way into my consciousness through the predictably masterful camera work of Joe Atkinson. Credit Al Ponton and Lewis Chaney with expertly lighting this artistic offering. Successfully edited by Neil Kellen, this fifteen minute short packs all the entertainment value of any film two times thrice its run-time. 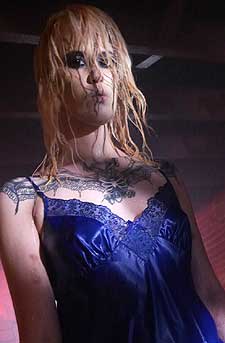 Hearkening to the film noir genre, this pseudo-narrative added color and complexity and presented a film that was as much horror as mystery. "Out of my Mind" was exactly how I felt as I tried to predict the outcomes of the actions in view. Once I surrendered to the fact this film was not playing back some tired, old formulaic devices but was instead telling me a story in a most unique way, I was rewarded with a tasty, tricky tale.

Rusty James is atop his game in his portrayal of best-selling mystery author "Carter"; haunted by rejection and a desire to redirect those negative emotions into something better suited to pay the bar tab. Mina Fedora brings her assets to bear in a mighty performance as the Woman in Blue. Though her eyes plead for rescue, Carter is limited in his available options to relieve her misery.

I find this to be a deep deep drama that develops fully in the mind only upon reflection. It must be a great feeling for everyone involved to know their efforts have resulted in such an outstanding film. Keep 'em coming Cindy!