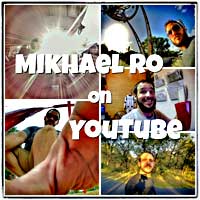 When you say you are giving someone the benefit of the doubt aren't you really saying that you doubt them but in a way you want to believe? That is really a skeptical outlook - sort of - I'll admit that. But when I first started following the exploits of Mikhael Ro I had doubts. I am not actually even sure how I came to click the "subscribe button" on his YouTube Channel.  However, I have made it a point to check out his videos as they get posted because - well, because... - let's just say - I do, okay? It was not until he presented his groundbreaking documentary titled "Vacuuming a Bed" did I know for sure that this was going to be a channel to watch.

I have no doubt that this video is the only video of vacuuming a bed I have ever come across on the internet. I am sure I could probably come up with another if I resorted to some of those highly overrated search engine sites but thanks to the bold initiative demonstrated by Mikhael Ro I cannot ever imagine resorting to any such search. I suspect this video on vacuuming a bed to be the pinnacle of this rather unique art form.

Kudos Mr. Ro! I only hope your assistant (featured in this clip) sees fit to return to you the valuable treasure you recovered while producing this film; I must say you have earned it (and more!) You have certainly earned the BlogDogIt Spotlight and all the popularity, pride and prestige that is sure to come your way as a result.

Please enjoy the video embedded below:

You have to understand folks, that household chore videos are not the everyday fare of this up and coming vlogger but this offering should let us all know - in no uncertain terms - that Mikhael Ro has a camera and is not afraid to use it in his quest to take the internet by storm. Visit his little corner of the World Wide Web and let him take you around Tampa and environs to show you the sights. Take virtual hold of his MagicBand pass to Disney World and see what a guy who has practically grown up in the park points his lens toward while there.