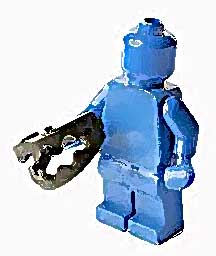 Persistence pays (but sometimes only the minimum.) Be that as it may... today I captured on film - (well, actually that's not right) we need to come up with another term to replace "Caught On Film" because it will soon be a phrase that will make no sense to folks... - anyway, I finally took some pictures of this car I have been seeing occasionally on my daily commute for the last year or so.

I have told people about this and have actually attempted to get some snaps a couple of times before (without success.) This zippy little "smart" car is about as easy to get in frame as a hummingbird or butterfly. So although the pictures I have are of basic "Bigfoot evidence" quality, I am sure you will see here that this creature does indeed exist. [Indiana Plates]

As a side note (or foot note) to this: I made an interesting discovery in my dissemination of this little presentation... Since the pictures I took were basically crap I did what any red-blooded photographer would do; Use Them Anyway. The creation of an animated GIF pretty much precluded me from sharing this on facebook so I resigned myself to sharing on Twitter and BlogDogIt. But, lo and behold, I found when I went to save the image from twitter (to use to illustrate this article) it offered for me to save as an MP4 video file. (Free GIF to MP4 converter, people!) Facebook readily accepted this video file and so this goofy little project has infiltrated that corner of cyberspace.