I can't decide if Big Biting Pig Productions is truly getting better with every project or if I am just becoming that much more of a fan. Whatever the case may be, I came away from my viewing of PJ Woodside's Frances Stein with a fresh appreciation for that crafty band of horror-bent denizens of Madisonville, Kentucky.

This year was PJ's turn to head-up the project and not only did she decide to bring us a completely original take on the beloved "mad scientist" genre, she made the very bold move of casting herself into the shoes of lead/title character (in addition to wearing hats of writer, co-producer, director and likely any other role one can ascribe to a master of independent film production.) 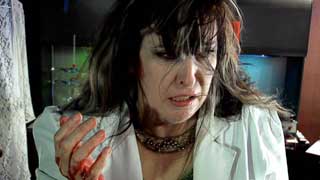 I must confess that in the days, weeks and months leading up to the release of this picture I was a little nervous regarding PJ Woodside assuming such a monumental role in the success or failure of the project. I have seen every film released by Big Biting Pig Productions (make that 9 now) and am very familiar with spotting PJ on screen in one supporting role or another but would never have expected her to be our leading lady. Simply put... What was I thinking? PJ was the perfect choice to play the brilliant (but whacked-out) suffering scientist driven to madness, ultimately by the effectiveness of her discoveries. 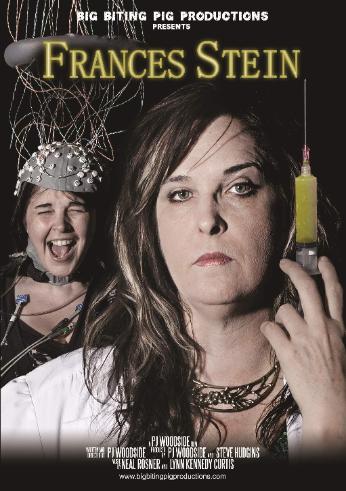 Frances Stein plays as much to the heart as to the horror. Fans of PJ's work will be quick to tell you that she is not content with knocking your socks off (which this film certainly does) she must grab you by the "gray-matter" and pull you to the edge of your seat. You will want to experience this story first hand so my advice to you is to avoid any synopsis or (other) reviews and get thee to a screening of what is sure to become the talk of the indie horror circuit. This one will become already is a classic.

Followers of Big Biting Pig Productions will recognize many familiar faces on screen and/or names when the credits roll. If you do not do as I did and applaud as those credits roll I would be very much surprised.

Thanks and congratulations to entire cast and crew on yet another successful release.

Be sure to see: GIFed Mad Scientist