A prime example of the many benefits in supporting and promoting independent filmmakers came to me a little while back in the form of a new twitter follower by the name of  Kyle Hester.

A visit to Kyle's twitter feed will show him in a relentless promotion of his latest Acting / Producing project Burden of Freedom, which promises a gripping story in support of PTSD awareness. You should check out the film's Sizzle Reel/Preview and support the project via their GoFundMe efforts, if you are so inclined.

It was through this vein of exploration that I happened upon Mr. Hester's Acting Reel and therein discovered a sparkling gem of a short film:

You may take the girl out of Chicago but you will never
take Chicago out of the girl. 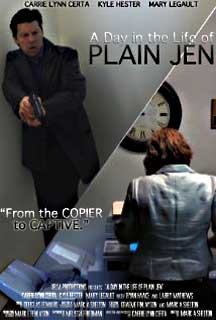 Jen is set in her ways even after relocating, but ultimately gives in to her cousin / coworker's coaxing to glam it up in an effort to join the West-Coast "in" crowd. Jen is portrayed by the film's writer and producer  Carrie Lynn Certa; a role that seems as comfortable as an old pair of sneakers for this very talented actress. Of course the character draws heavily on Carrie's own personality and as such results in a completely believable portrayal. Small wonder then that A Day in the Life of Plain Jen and Carrie Lynn Certa (Ursa Productions) were awarded the 2011 Accolade Competition's Award of Excellence for Leading Actor.

Kyle Hester offers up a note-worthy performance himself as Matthew, Jen's primary "plot complication." Together this match-up results in an explosive "chemical" reaction that leaves jaws, walls and furniture arrangements feeling the effects of their having come together. This action packed short film is expertly produced with precious little indicators of its independent origins.

Having seen the behind the scenes reel prior to watching the actual finished production I probably did myself no favors - beyond getting to know the cast and crew a little bit better, going in - but it was all the motivation I needed to seek out this brilliant example of independent cinema and I am so glad I did.

This was a very entertaining diversion and great fun to watch. I regret that I came to this creation too late to catch it on the festival circuit but I have no doubt that every screening room was witness to a smiling public exiting afterward convinced they had just experienced some 21 minutes well spent.

Thanks to Kyle Hester and  Vimeo I can happily encourage you to treat yourself to this inspired work of art.

Now, don't miss: BTS: A Day in the Life of Plain Jen