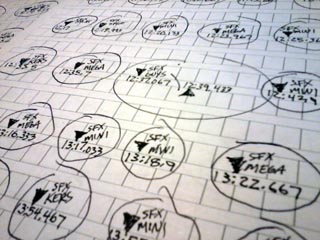 While the original unedited video I shot at the Church Cookout / Water Balloon Fight was a lot of fun to watch its sound quality was pretty awful mostly because the location for the event was the windy courtyard situated between the Church and the highway. Even the portions of audio that were not offensive had very little to offer in the grand scheme of this "documentary" and so I decided to edit all clips with the sound removed. I figured once I had the video where I wanted it I would seek out music to accompany the footage. This was somewhat the opposite of what I had done for the Rockin'4God video where I had first completed the soundtrack and then built the visuals around that.

Rockin'4God was a major project that did not surface until nearly three weeks after the event; for this production I assigned myself the arbitrary deadline of having it finished before one week had passed. As it turned out I met that deadline with a few hours to spare.

I almost turned to Cinelarra on Centos to work on this project but I have never really taken the time to become comfortable there since I installed it awhile back. Instead I called upon those open-source utilities I have grown to know so well over the years: I am referring to VirtualDub, Audacity, MPlayer/Mencoder, ffmpeg and good-old-fashioned DOS batch files.

The Samsung HMX-F90 camera I use produces MP4 files in-camera and I was recording in HD 1280 X 720. This was probably a waste since I end up converting everything down to 720 X 402 anyway (to better match the poor performance of my Pentium 4 editing station) but staying true to the maxim "Garbage in. Garbage out." I wanted to give this project every chance for success.

The first step after uploading the original files to the computer was to batch-remove the audio and down-sample each clip to get those files I would be taking into the video editor. I turned to Mencoder for this task and created the following batch file to process all MP4 files in its same container directory:

This command resulted in the creation of files named the same as the original video clips but with the appendage of ".NS.avi" - these files being ready to go for editing in Virtual Dub.

I knew going into the editing process that there would be five major segments in the telling of this story:

I created six folders in the projects working folder to correspond with these segments. As each clip was edited down to their essential bits they were saved in their appropriate folder and given a new name corresponding to their segment membership and the order in which they were shot (e.i. OT_001.avi, PW_001.avi, CO_001.avi, etc...)

The title cards were created in PhotoShop and saved-out as JPG files of the proper dimensions to match the video. These images needed to be converted into AVI video files so they could be incorporated into the film. I have found ffmpeg to be the perfect utility for this operation and have created the following reusable batch file to handle the task:

This allowed me to create a video clip from a still image that is compatible with Virtual Dub. It must however be converted from within Virtual Dub (saved-out as AVI) to give it the same characteristics as all other video clips.

When a video clip has been edited in "V-Dub" it must be saved as AVI using "full processing mode" configured to use the desired compression codec/scheme - I saved all edits for this video using ffdshow codec as I find it results in a very compact file size while still retaining a high degree of quality.

Once everything had been edited down and converted I used the following batch file to gang process the collection of clips into four distinct segments:

With these chapter videos "in the can" I was now ready to scour the internet in search of musical accompaniment for each unique segment. I now knew the length of each portion and took my search to Archive.org knowing that they would likely offer a grand selection of public domain music from which to choose. When I would come across something that seemed it might work I would play the video in one Mplayer instance while simultaneously playing the audio selection in another Mplayer instance. Using this technique I had located several pieces of music that would serve the purpose.

While previewing the video in this way - with an ear bent toward the audio accompaniment - I spotted a scene wherein Pastor Mike slipped and fell (albeit gracefully) in the wet grass. It was at this point I thought how fun it would be to synchronize the sound from a slide-whistle - ala cartoon comedy. I figured I could lay this sound down in Audacity (where I planed to build the audio track anyhow) so again I ventured out to the internet to find that familiar slide-whistle "fall-down" sound and before I knew it I was hunting down water balloon breaking sounds, various splats and splashes, and any other sound effect I thought might take this production to a new level. 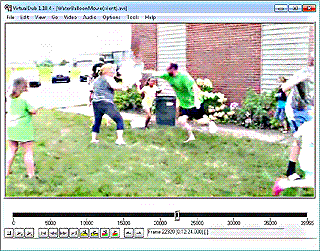 Once all the necessary sound effect files were assembled they were converted to WAV format and normalized to common levels converted from stereo to monophonic where necessary and then re-converted to MP3 format to be used in the sound track. The obvious next step involved listing each sound to apply and its precise timing information. I started jotting these times on a legal pad but soon began to feel that a timeline style form would offer a more instinctive way to make these notations. After searching the internet for a pre-made form and finding none I decided to whip something up in CorelDRAW to do the job. Now the internet contains at least one option for the downloading of a timeline work sheet [download: AV-CueSheet.pdf]

In all there are nineteen separate sound tracks utilized in the making of this video. The screenshot below shows the finished audio layout as a clickable image map. Hovering over each track will display its function while clicking a track will play its associated sound file. In order to create the finished tracks as efficiently as possible a count was made of how many of each sound effect was required and that number of copies was placed within its assigned track with approximately 2 seconds between each instance. The job then became one of working down each sound track row and adjusting the timespan (as measured from 0 starting point) by inserting precisely measured silence between each until all sounds were positioned at their exactly prescribed position along the track. Each of the various sound tracks were completed one at a time until the job was complete. Several adjustments in volume were performed throughout in a effort to balance many competing sounds.

Click on the pictured tracks below to hear their mp3 audio file. 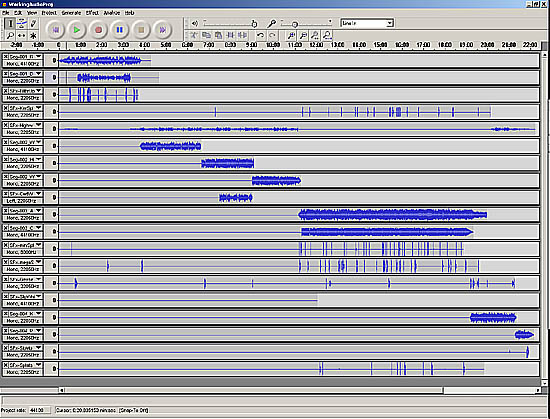 The finished audio job was exported as MP3 to a single file that was mated as audio source for the silent video file in Virtual Dub. Since there was no video processing to be done the export was accomplished using direct copy of source audio and video. The entire blending of audio to video took less than two minutes to process.

The published video ["The Water Balloon Fight Movie"] represents the first and only version of this project. I am sure I could spend many more hours tweaking this and adjusting that but I am very pleased with this video and have learned a trick or two that may factor in to my next video project. I can hardly wait to find out what that is going to be.