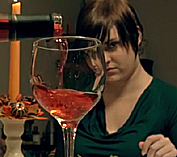 Mystery novelist Talia has success, a supportive husband, a beautiful new home in the countryside -- but no new ideas. However, a discovery on the grounds of Talia's new home captures her imagination. In an ancient chest she finds art dedicated to a demon called The Pale King, art that could only be the product of a tormented mind. Before long, the Pale King whispers to Talia, and her quest to create becomes an obsession with darkness -- one that could drive her to murder.

Down A River Of Time Without A Paddle

The Pale King has the unstoppable power to control his subjects; a power which extends to the viewer of this film. If you are someone that cannot bear the thought of being out of control then this film may take you out of your comfort zone. If however, you are a fan of unique story telling and can handle the sight of blood then this is 22 minutes of horror that you will want to watch from beginning to end, front to back, back to front, and over and over.

Cleverly Written and Expertly Directed by Anton Barnett; it sets the "Keep an Eye on This Guy" flag for this reviewer.

Kristine Renee Farley lends her legendary indie star-power to the project with a gripping portrayal of loving wife Talia, gone stark raving mad in a quest to break the bonds of some particularly stubborn writers block. Kristine is as mesmerizing as she is mesmerized and fans of her work will certainly rank this among her best performances (I do at least.)

Marcus Porter did a bang up job in the role of ill-fated spouse and bread-winner; obviously too wrapped up in the cut-throat world of business. While not exactly oblivious to the disturbing behavior exhibited by his wife, one can't help but wonder if his advice was too little too late.

Stephen Smith came across as believable in the role of real estate broker - perhaps too believable... Dan Flahive expertly delivers the creep factor as the all but detectible (and certainly detestable) Pale King.

The music was brilliantly incorporated thanks to the talents of Miles Christian Harris and accompanies us along this disjointed river of time.

Of course the masterful work of cinematographer Robert Dalley is on display and removes any hint of the independent nature of this production. "Spectacular" is a word in the English language but it is in danger of being co-opted as a trademark of Bobby's camera work. Marc Gernhardt is credited as "first assistant camera" and all I can say is "you lucky dog!"

LaShaundra Bridges and James Treakle (Valiant Dead) have attached their name to a work of art and they are to be commended for their vision.

Be sure to stay seated for the credits. There are many other talented individuals deserving of a pat on the back. And don't forget - the show ain't over 'till it's over.[smiley:;)]