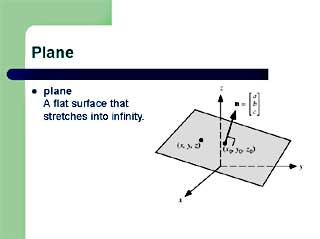 Pretty much anything you want to know, you need only jump on your favorite search engine enter some keywords and before you know it you just modified your IQ by some fraction of a point. If the internet was kind then that should be a net intelligence gain; you know however, that you always run the risk of shaving off a point (or maybe two) in the exercise.

Sometimes the subject you are seeking to explore is so obscure you don't turn up anything remotely helpful. That is what I was facing this morning when I finally got around to doing something I have been meaning to do for quite awhile...

Build an airplane from 1/8 inch thick Fome-Cor board.

I have a hard time imagining that I am the only one who has pondered making a glider out of Foam-Core; not intricately carving a model plane out of Styrofoam but creating a bigger version of those little balsa gliders that all the really cool kids fling around the neighbourhood. I have worked around Foam-Core for a great many years (in photography and graphic arts) and I finally waited as long as I could; I just had to know. Since the internet was pretty useless for this project, I decided I would just wing it.

The results are pictured here. Channelling my inner Wilbur/Orville I carefully 'engineered' the following lines. I was kind-of going after a Spitfire feel and think it's not too far off the mark. After first drawing the fuselage (which came in at 27 inches overall) I came up with the wings which offered a 30 inch span - swept back 1 inch in the leading edge; swept forward 2 inches in the trailing edge; measuring 8 inches at the center-line.   The tail-wing/elevator spans 12 inches and is reverse swept compared to the wing at 1" leading edge, 1/2" trailing edge sweep through a 4-1/2" center-line.The yardstick is included in the picture so we might rightly call this a scale template

Wing mounting slots were positioned somewhat more carefully than random by intersecting the fuselage in the horizontal at the center of the nose and perpendicular to the vertical of the tail. Fuselage center-line is 6 inches behind the wing's leading edge. All cutting was done freehand with an X-acto Knife. I intentionally designed this to be cut using all straight lines to ease the job of reproduction should I ever duplicate this prototype. A jumbo paper clamp was just about right for a nose weight leaving the finished glider just a tad tail-heavy. "Close enough for government work."

The time had come to launch the maiden voyage. Recruiting my back deck and yard into service as an impromptu Kitty Hawk I was fortunate to be facing only a slight head-on breeze and deemed conditions perfect to gently push this bird from the nest. A 20 foot, gentle, sloping fall from a 10 foot height resulted in a safe landing in the grass (as shown in the picture.) 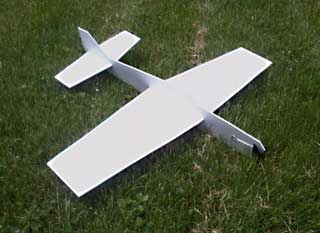 Not a bad first attempt at realizing a long held daydream. Tinkering with bending the wings into a dihedral, adjustments to elevator, inserting wings in reverse orientation all resulted in no improvement to the original design and ultimately led to a catastrophic stall that resulted in a nose-dive and subsequent crushing impact. Foam-Core is nowhere near as resilient as balsa wood and that is probably why you don't often hear of these sorts of experiments.

So, bottom line? As an art form flat Foam-Core airplanes might have potential but as a toy... not so much. I think any further attempts to build a model aeroplane out of Foam-Core will have to utilize a more complex foray into three dimensions in a quest for durability. Before you invest much time in this pursuit, might I recommend the boundless entertainment and joy available in the building and flying of kites. 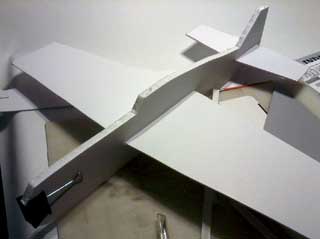 Using the original fuselage as a template I tried cutting a new wide-body version from 1/2" thick foam-core. Attaching the same wings, elevator and nose weight give a far better flying, more durable craft. So if you are looking for something to wow the kids (or the kid in you) this just might be a step in the right direction!