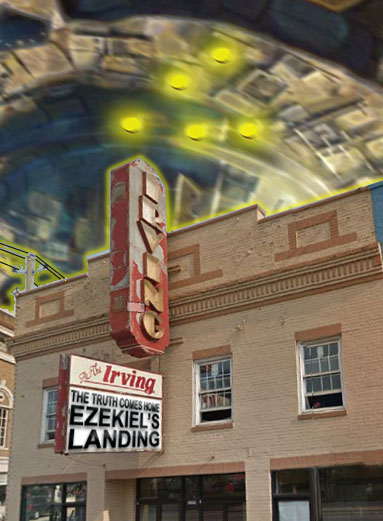 While the rest of geekdom was shedding a happy tear over the announcement of a new installment in the the Star Wars franchise - Star Wars: Episode VII - The Force Awakens - this nerd was beside himself over the fact that the world premiere of the long awaited, much ballyhooed, indie sci-fi, horror, action, thriller Ezekiel's Landing was about to occur and in my own back yard (so to speak.) Now don't get me wrong I am a big fan of Star Wars and take pride that I was among the first in line for the premiere screening of Star Wars: Episode IV - A New Hope in Indianapolis at the luxurious Eastwood Theater in 1977. 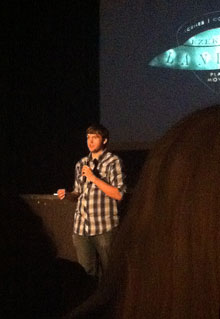 Irving Theater - not as plush as the infamous Eastwood but with a far more colorful history - was the "happening" place-to-be in Indianapolis for die hard fans of independent films of the sci-fi persuasion. On April 24 the world premier of Eziekiel's Landing was featured "At The Irving."

On first inspection one might find the Irving better suited to a random Rave than a world premier, motion picture unveiling but what it lacked in bolted-to-the-floor seating, carpeting and ceiling tiles it more than made up for in warm, friendly fans of creativity rubbing elbows with the craftspeople who came together to make the night even possible and ultimately enjoyable. 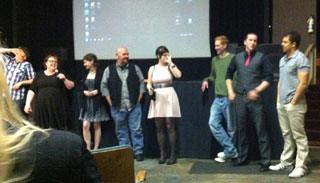 Executive Producer Kate Chaplin took to the microphone as a pleasantly enthusiastic Master of Ceremony sharing the spotlight with Writer/Director James Treakle who set the stage for a respectable crowd of eager theater goers. The 85 minute film, included the briefest of intermissions 3/4 of the way through by some very needy anti-virus software on the projectors source MacBook - that's free anti-virus for you.[smiley:;)] 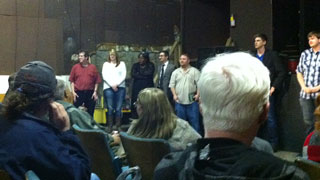 Following the featured presentation was a very informative Q&A session that had all cast and crew in attendance standing in the front of the hall. After taking several questions a suggestion was made that perhaps the wireless microphone should be passed down the line so that each member in attendance might declare their favorite scene and share one of their fondest memories of the production. This was priceless entertainment that can never be equaled. I am thankful to social media for keeping me in the loop so that I could attend this once in a lifetime event.

I encourage you, dear reader, to support the independent filmmaker in whatever genre suits your taste and discover right there, in your own "back yard," what it is that makes the movie industry so magical: the blood, sweat and tears of those individuals with the vision and drive to love, create and share in pursuit of what can only be called a really good movie.

In an effort to show my support for these folks I offer the following review of the film Ezekiel's Landing - originally posted to IMDB:

Ezekiel's Landing represents Writer/Director James Treakle's foray into the realm of feature length films. Teaming with executive producer Kate Chaplin and cinematographer Robert "Bobby" Dalley, what they deliver to the Sci-Fi community is a work of art that is simply "out of this world!" Ezekiel's Landing is a Sci-Fi, Horror, Action, Thriller that pits UFO skeptics against the true believers, Earthlings versus Aliens and perceptions and memories against truth and reality.

Valiant Dead LLC and Karmic Courage Productions have brought to the Digital Big Screen an epic production that should bring exceeding pride to all those involved. In the genre of indie science fiction films, this one brings together a brilliant cast of characters dedicated to their roles and serious about their craft.

Naphatia St Pierre starring as Emma Wright (renowned author of an abduction memoir) gives a brilliant performance. Naphatia should be credited with elevating this creation from an amateur production to hover among those serious professional productions with genuine star-power - if she keeps bringing to the set what she has brought to Ezekiel's Landing then there can be no doubt that her's is a career to follow.

Ransom Pugh is certainly not to be discounted in his portrayal of Joel Hooper (a wink-and-a-nod to Spielberg,) a protagonist that is a force to be reckoned with. Joel is a professional skeptic who must confront repressed memories when he learns his childhood friends are forming a UFO cult and will not be denied; much bruising, blood and bare-chestedness ensue.

Abigail White is "packing heat" (in more ways than one) as UFO huntress and Emma's greatest fan, Kass Burroughs. Together Emma and Kass must go high-tech Cagney and Lacy on the bad guys with only the slightest expectation that they have what it takes.

Speaking of "having what it takes" - Kristine Renee Farley dominates the horror as Queen of the Cult, Natasha King. The power she lords over her minions is nothing compared to her power to cast a spell over the viewer of this film - evil in a package like this has got to be named Natasha - beware of this one.

The supporting cast are - each and every one - stars in their own right; Jeff Angel as hate-able Sheriff Ed Lucas and Edward Haynes Jr. as loveable Mike Berg certainly made their presence known in their show stealing portrayals; in fact, every actor on screen in Ezekiel s Landing has earned our attention and has contributed admirably to this epic indie masterpiece.

The superb technical aspects are not to be overlooked. Bobby Dally's creative genius is all over this production. Skill in low-light filming is a hallmark of this cameraman. Framing and angles that obliterated the confinement of the screen were successful in placing the audience squarely in the middle of the story in a way that give the edge of one's seat a good work-out. Superb editing skills are also on display amisdt a killer score that often emotes what we're there for.

Sincere congratulations to James Treakle for his persistence in taking a geeked-out nerdy vision of the ultimate home-brew sci-fi epic motion picture and delivering it to the world in such a splendid project. A job well done.

A very special thanks to my date-for-life Dara, credit goes to her for the snap-shots above.
Irving Theater Streetview Screen-Grab Thanks to Google