Occurrence at Owl Creek Bridge (1962) is a French made film from Director Robert Enrico. It is an adaptation by him of the classic short story by Ambrose Bierce. Produced by Marcel Ichac and Paul de Roubaix. 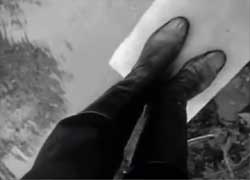 The story is set during the Civil War and has been captured in black and white. The film opens on a railway bridge over Owl Creek where a Southern saboteur is about to be hanged....

This embedded video presents the 25 minute Twilight Zone broadcast (along with Spanish subtitles.) It had been awhile since I had seen this stirring motion picture and I enjoyed it nearly as much this time as any previous viewing. I trust you will too.

How about an audio rendition instead?: