I have been following the Twitter Feed of Kathern Hayton for a few months now and thanks to that activity I was recently made aware of a special promotion she had in conjunction with StoryCartel whereby I could download her novel "Found, Near Water" in exchange for agreeing to give an honest review of the work. This post is me upholding my end of that most exceptional bargain.

After having read the synapses and excerpts for this book and actually getting to see and hear Katherine via her Canterbury Live interview, I was thrilled at the chance to finally read "Found, Near Water."

Katherine Hayton hails from Christchurch, New Zealand and - to be honest - my thoughts and opinions of New Zealand have their roots largely in the television sit-com Seven Periods with Mr Gormsby.* As great as that TV series was, one can only assume there is more to learn about this remote Pacific Island nation and titular home of the Kiwi. This story takes place in Christchurch and the prospect of glimpsing the life of the New Zealander was all the encouragement I needed to desire to read the story but by the time this offer to read for free came along I was eager to consume the writing of Katherine Hayton who, I was learning - by virtue of her blogging - has a way with words and an ability to engage the imagination.

*Thanks in no small part to the globe shrinking power of the late, great "TheBox.bz" 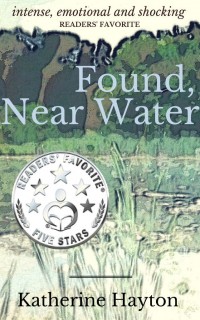 Rena Sutherland wakes from a coma into a mother’s nightmare. Her daughter is missing – lost for four days – but no one has noticed; no one has complained; no one has been searching.

As the victim support officer assigned to her case, Christine Emmett puts aside her own problems as she tries to guide Rena through the maelstrom of her daughter’s disappearance.

A task made harder by an ex-husband desperate for control; a paedophile on early-release in the community; and a psychic who knows more than seems possible.

And intertwined throughout, the stories of six women; six daughters lost.

I think it is fair to say that I have never been much of a fan of fiction per se and even less a reader of crime related writing. When I do set down to consume a novel it is more typically in the science fiction genre. More often than not when I read a book it is non-fiction - the dryer the better. I suppose my aversion to fiction has to do with what I find to be the tedium of proper character development and quite often my inability to relate or even care about an authors central characters. I often hear that for many people reading fiction is an escape but I reckon I have always preferred to keep a firm grip on reality.

"Found, Near Water" is a thrilling story of mystery and suspense that reads very much as a memoir and gives the reader the sense that they are privy to what would otherwise be sealed records regarding these six stories of loss.

It is strange how disparate losses can be the bond uniting several women in search of support. When answers are just as absent as their missing loved ones the options for moving forward are few and the urge to give up can be strong. But there is only so much that can be done when you are outside of the "system." A jaded social worker seems an unlikely hero for this support group but having a desk in the vicinity of a Detective Senior Sergeant may be just the break they have been waiting for.

I find it incredible to think that this is Katherine Haytons' first novel as I found it to be a most enjoyable read; a compelling "page turner" that had an unrelenting grip on my interest and had me relating and emoting with these characters as though I too required a seat in that circle of support. I was impressed by the details and imagery and found realism in the New Zealand vernacular and applaud Katherine for not sanitizing this tale of horror and hope.

I recommend this book to anyone with a fondness for compelling storytelling of mystery and suspense. If you have ever found yourself looking to read a great work of fiction by an obscure author on the fast track to success, pick up "Found, Near Water" and you too will be on the lookout for her next one. Bring it on Katherine Hayton... and thanks for sharing!