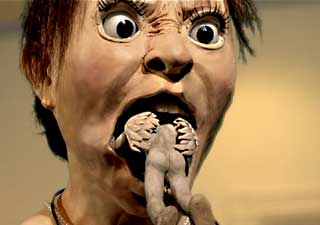 Venturing aimlessly around the internet oftentimes results in seeing things that cannot be unseen. Sometimes an image is so compelling that it leaves you with little choice but to take a closer look. The picture above is one of those images that demand more than a casual glance and investigating its origin is what led me to the discovery of The Happiness of the Katakuris; quite possibly the greatest Comedy Horror Musical since The Rockey Horror Picture Show.

In searching around to see what others were saying about this film I happened upon Film Grimoire's review of "Happiness" and as a result found another gem of a web site to share with the fans of BlogDogIt. 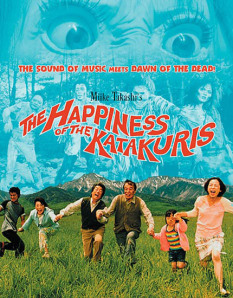 The Happiness
of the Katakuris
(2001)
Surrealist, horror, musical, black comedy

Takashi Miike’s musical-horror-comedy The Happiness of the Katakuris (2001) follows the exploits of the failure-prone members of the Katakuri family as they start up their quiet mountain bed & breakfast inn. As business starts picking up, and all their guests begin dying of various ridiculous causes, the Katakuri family is forced to band together in the face of supernatural events.

Takashi Miike is responsible for such shockingly violent films as Ichi the Killer (2001), Audition (1999), and Izo (2004). It is no shock that The Happiness of the Katakuris contains quite a bit of violence and death. But is it surprising that the majority of that violence is presented as humorous, and often times can actually be quite funny. Only Takashi Miike, the master of on-screen death, can present the multiple deaths of innocent people as shamefully hilarious. There were moments where I caught myself laughing and actually thought, “Wow, I’m a horrible person for finding this funny.”