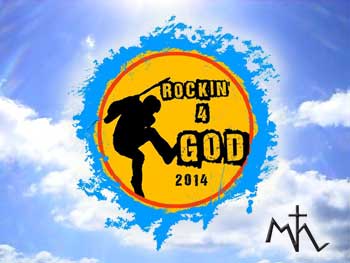 It is often said that the Lord works in mysterious ways. His ability to have me create a video documenting the "Rockin' 4 God 2014" event is ample evidence supporting that old maxim.

I am no documentary filmmaker (by any stretch of the imagination) but I have been looking for ways to exercise my video making muscles and this opportunity just struck me as just too good to pass up. It was an opportunity to photograph a rock concert with an all access pass. A day long event featuring four bands, a clown act and a sermon thrown in for good measure. Just the sort of volunteer work that would appeal to this old-school hippie photog.

Going into it, I was not exactly sure how I would go about completing the project. My video camera is little more than a toy - 640 X 480 pixel resolution with a fixed focal length lens - but I resolved to view this as an artistic endeavor and give it my best shot - as it were. The name "Rockin' 4 God" suggested to me that the video should be "high energy" (whatever that means) so a tripod in the corner was out of the question. I was going to have to go at this with a hand held camera to get in on the action.

I think it is safe to say that I am certainly no DevinSupertramp - but what I couldn't do with a rig like his? Since a GlideCam exists only in my covetous mind I decided to visit my freelance hardware store (a.k.a. garage) and see what I could come up with in the way of constructing my own Stedi(ish)Cam device. The internet is chocked full of ideas on this subject but seeing that my garage was gimbal free, I opted to go for a weighted pendulum style device that many claim to be a step above a purely hand-held camera - and I will give them that.

If you can scrounge-up 46-1/2 minutes you should check out
"Rockin' 4 God" The Video Project.

The actual job of recording the event presented many challenges but that is the name of the game and honestly what makes it so fun to do. I took along my Canon 5-MP rangefinder camera to - at least - get some quality stills and realized midway through the shoot that I would be combining stills and video clips for this video project. The little video camera uses SanDisk memory and I felt confident that the 4 Gigabyte chip would be ample for the day but took along two more 1 GB disks as a precaution - good thing too because for some odd reason the 4 GB disk refused to hold more than about 500 MB. It took every bit of those other 2 Gigs to get-r-done. When it became obvious that I should now use the video camera sparingly I started relying more and more on the still camera to document the event.

That was working fine until about two thirds of the way through the day when the Canon's battery went belly-up and I found myself regretting not tearing the house apart looking for the spare pack when I was gearing up for the day. Thankfully the video camera has the ability - as do most video cameras - to take still images. I finished the day bouncing back and forth between still and video modes adding one more layer of "what am I doing" to the task at hand.

Of course recording the event was only the beginning. Compiling all the material into some respectable presentation seemed nearly insurmountable in the beginning stages but by taking the tried and true approach of breaking the project into numerous smaller tasks - as evidence will show - the job was doable.

I am sure there are all kinds of video editing software out there that would make quick work of my little project but being that all the really good software products require you to pay money for the privilege of ownership - I was content to make the most of those open source options that I have come to know over the years. The first thing I knew was that if I was going to incorporate all those still images into the project they would have to be converted into video clips. After the first cull of available images I relied on everyone's favorite command line utility ffmpeg to batch convert all jpg's into 5 second .avi video clips. MPlayer/Mencoder also figured heavily in the mixed nuts and bolts. The cut and splice video editing was performed in Virtual Dub.

Before the video editing could begin I had decided to lay down the sound track so that there was something in which to fit the video segments. I had decided while shooting that I would incorporate the various bands studio recordings in the project so my first step in this regard was to secure permission to use their material in the video. These are all a great bunch of folks and gladly allowed their use. Of course there was no studio recording of Pastor Mike's message to the crowd and after discovering that the sound engineer would not be capturing any I recruited my wife to stand in front and capture the sermon on her smart-phone. Audacity was up to the challenge of cleaning up the resulting audio; knocking down the noise from the nearby highways and byways in a respectable fashion. It was not long however, before I was to discover just how little I knew about sound editing.

The group Y.I.B.I.G Project were geniuses for bringing along a huge assortment of hula-hoops and passing them out to some of the more active members of the crowd. This resulted in many excellent opportunities to capture some fun-time action (which could do no harm to this video project.) They played an energetic little tune called "Hoopa-Hula Dance" that unfortunately (as it turns out) existed only in its live performance. There can be no studio recorded stand-in for this segment. Funny thing too as the only song that was completely recorded on the video camera was in fact this "Hoopa-Hula" number. Now if the video camera itself was a toy its audio recording facility was a joy-buzzer. The recording of that song although complete was simply awful and I mean the absolute worst. Noisy with clipping and distortion of every stripe. A few hours of filtering and equalizing and "I don't know what all" resulted in a useable track to accompany the hula-hoopers. Good thing the action was such that it distracts from the audio. Still, sorry to have to subject the audiophile to such torture.

So with these tools at hand I gave myself over to the Good Lord to give it his best shot at turning it all into something Mount Zion General Baptist Church would not be ashamed to have their name attached to and of course, where there is His will...