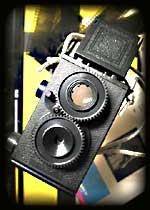 Ever since the completion of the Recesky twin lens reflex camera kit I have been anxiously awaiting a bright sunny day to test it out but after waiting for 8 days I could not take the suspense a minute more. I decided to get the show on the road and loaded the new box with some 15 year old Plus-X "roll your own" and headed out into the mostly-cloudy afternoon world. I was hoping for plenty of sun mostly because of the severely out-dated film stock but I was also hoping to get some high contrast lighting for the sake of higher impact images. Perhaps the 'Stones said it best, "...you get what you need."

All in all - I must say - I am fairly pleased with the resulting pictures and can now hardly wait to try it out with some fresh film (and sunshine.) Using the Recesky feels a little debilitating with its single shutter speed and single f-stop* and peering onto a 35mm sized "ground glass" is a bit of a challenge with my reading glasses; next time out I am going to take along a loupe so as to focus a bit more critically. [*The Recesky does offer the ability to remove the aperture disk from behind the taking-lens for a larger f-stop (and reduced depth of field) but I would just as soon not mess with dismantling the taking-lens assembly.]

The best results from test roll number one are presented in the slide show above. Click on the image for a higher resolution example. There is a stray internal flare that shows consistently in the images. I need to determine if that is from a light leak or just shiny guts.