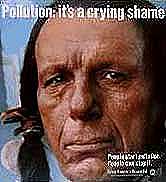 It was GatorWoman reminiscing about her meeting with the legendary "Iron Eyes" Cody [see Walking With The Alligators - Earth Day Memories, then and now~] that got me thinking back to the mid-seventies and anti-pollution campaigns of days gone by.

Cody was widely seen in his "crying chief" role in the "Keep America Beautiful" public service announcement (PSA) in the early 1970s. The environmental commercial showed Cody dressed as a Native American, shedding a tear after trash is thrown from the window of a car and it lands at his feet. The announcer, William Conrad, says: "People start pollution; people can stop it."

As memorable as that "Keep America Beautiful" spot was it was the United States Brewers Association's "Pitch In" campaign that I recall as being one of the most effective or rather affective anti-litter campaigns. It was that infectious "jingle" - written by Steve Karmen  that I recall as becoming a mid-seventies Brainworm. 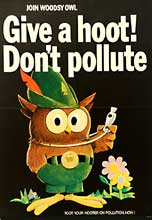 Seeing this video again takes me back to those days in May spent at the Indianapolis Motor Speedway in the days leading up to "The Greatest Spectacle In Racing" - The Indianapolis 500. In the height of the "Pitch In" campaign this song was played at the track with such absurd regularity that many in attendance fell prey to this anti-litter brainwashing and would join the collective hive-mind and sing along every time the PSA was broadcast. It was actually heartwarming to witness so many people joining their voices together in support of a cleaner planet. Even to this day, I cannot stand litter-bugs - coincidence? I think not...