The Internet Archive Console Living Room harkens back to the revolution of the change in the hearth of the home, when the fireplace and later television were transformed by gaming consoles into a center of videogame entertainment. Connected via strange adapters and relying on the television's speaker to put out beeps and boops, these games were resplendent with simple graphics and simpler rules. 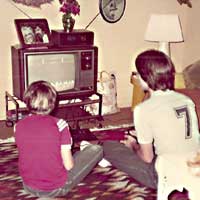 The home console market is credited with slowly shifting attention from the arcade craze of the early 1980s and causing arcades to shrink in popularity, leaving a small percentage of what once were many.

Through use of the JSMESS emulator system, which allows direct access to these programs in your browser with no additional plugins or settings, these games can be enjoyed again. Simply click on the screenshot or "Emulate This" button for each individual cartridge, and on modern browsers the games will just start to run. As nostalgia, a teaching tool, or just plain fun, you'll find hundreds of the games that started a billion-dollar industry.

These games are best enjoyed in an up to date version of a modern browser. Currently, there is no sound in the games, although that feature will be added soon. Please read carefully regarding key mappings of the games and programs, to use them in your browser.

Simply click on a system below to browse through available games and cartridges and try them out. Where possible, links to manuals and additional information are available for reference.

The Atari 2600 is a video game console released in September 1977 by Atari, Inc. It is credited with popularizing the use of microprocessor-based hardware and ROM cartridges containing game code, a format first used with the Fairchild Channel F, instead of having non-microprocessor dedicated hardware with all games built in.

The Atari 7800 ProSystem, or simply the Atari 7800, is a video game console officially released by Atari Corporation in January 1986. The 1986 launch is sometimes referred to as a "re-release" or "relaunch" because the Atari 7800 had originally been announced in May 1984, to replace Atari Inc.'s Atari 5200, but a general release was shelved due to the sale of the company. In January 1986, the 7800 was relaunched and would compete that year with the Nintendo Entertainment System and the Sega Master System. It had simple digital joysticks and was almost fully backward-compatible with the Atari 2600, the first console to have backward compatibility without the use of additional modules. It was considered affordable at a price of US$140.

The ColecoVision is Coleco Industries' second generation home video game console, which was released in August 1982. The ColecoVision offered near-arcade-quality graphics and gaming style along with the means to expand the system's basic hardware. Released with a catalog of 12 launch titles, with an additional 10 games announced for 1982, approximately 145 titles in total were published as ROM cartridges for the system between 1982 and 1984.

The Astrocade is a second generation video game console and simple computer system designed by a team at Midway, the videogame division of Bally. It was marketed only for a limited time before Bally decided to exit the market. The rights were later picked up by a third-party company, who re-released it and sold it until around 1983. The Astrocade is particularly notable for its very powerful graphics capabilities for the time of release, and for the difficulty in accessing those capabilities.

The SG-1000 (????·?? Esuji Sen?), which stands for Sega Game 1000, was a cartridge-based video game console manufactured by Sega. This system marked Sega's first entry into the home video game hardware business, and while the system was not popular, it provided the basis for the more successful Master System. The SG-1000 was first released to the Japanese market on July 15, 1983. Incidentally, this is exactly the same day that Nintendo's Family Computer was released. The console reached minor success in that market and sold moderately well within Asia until 1985. The system was launched in New Zealand as released by Grandstand Leisure Limited, Australia by John Sands and in other countries, such as France, Italy, Spain, and South Africa. The console in its original form was never launched in North America or the UK.