"This really is the greatest story never told" says Dr. Greer, "Once people understand that classified projects have figured out how UFO’s operate, they will realize we no longer need oil, coal and nuclear power. This is the truth that has driven the secrecy."

Steven M. Greer is founder of  The Disclosure Project,  The Center for the Study of Extraterrestrial Intelligence (CSETI) and The Orion Project. 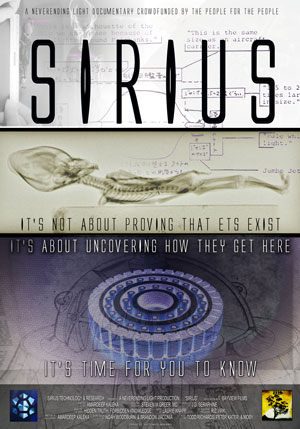 Sirius is a 2013 documentary film that follows the efforts of Steven M. Greer to reveal what many believe is information about top secret energy projects and propulsion techniques. It is based on Greer's book, Hidden Truth, Forbidden Knowledge and features interviews from former officials from the government and military who claim that the United States government is covering up the existence of Unidentified Flying Objects (UFOs) and extraterrestrial visitation. Also featured prominently are images and a DNA analysis of the six-inch human skeleton known as Ata that was found in the Atacama desert in northern Chile in 2003.

The first section of the film is an attempt by the filmmakers to offer what they consider to be evidence for the existence of extraterrestrial intelligence. Government documents, government and military witness testimony, and audio and visual evidence are all mentioned and explained.

The second section contains interviews of people who claim that there are secret technologies being suppressed for development or use. The filmmakers interview people who claim to be able to derive energy from what they call a "zero point field" while opining that the military and industrial complex that President Dwight D. Eisenhower warned about has suppressed this information. The claim is promoted that man-made anti-gravity vehicles have been in use for nearly 50 years and that some have been used in order to perpetuate the ET abduction hoax for control over the population.

The final section explores how the filmmakers believe peaceful contact with extraterrestrials is being made through the CE-5 protocols developed by Greer [Source:  Wikipedia]

BlogDogIt Note: This is NOT an affiliate screening.

A Neverending Light Documentary Crowdfunded By The People For The People

A documentary about the life of Dr. Stephen Greer and his claims of existing energy technologies that would change the world as we know it. [IMDb]