While out blog-hopping I came upon the WomanBitesDog blog and thought "Oh my! That is even more unusual than man bites dog"... Of course, I took the bait. What I discovered was an entertaining, light-hearted and down-to-Earth blog by Lindsey Jones. The following is from her "About Page":

Lyndsey Jones is a journalist, playwright and comedy writer. Her debut play, Martini Bond: Her hunt for the spy who loved her mum – a James Bond parody – was one of the best selling shows at the 2012 Camden Fringe Festival in London. The show went on to enjoy a successful four-night run at the Broadway theatre, Barking and was also live streamed. Martini Bond is on at the Kings Arms, Salford, near Manchester...

...Lyndsey would like to share her experience of writing the play, producing it, watching her words come to life, and possibly flirting with e-publishing.

Martini Bond: Her hunt for the spy who loved her mum 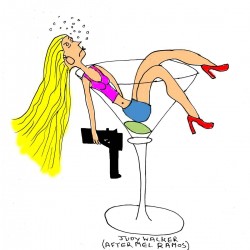 Martini Bond, brought up in a single parent household, is tracing her family history. After James Bond’s file was left on a train, Martini’s memories were shaken but not stirred. She had never thought of meeting her dad. Until now.

But he is missing presumed dead after an explosive encounter with Franken von Banken, a mad scientist. Franken has spliced the god particle with villain DNA and hopes to resurrect the world domination role that god is so good at.

Martini’s mission is to find her dad – and save the world – only she’s never spied, can’t drive or shoot to kill. But, then again, perhaps she’ll just go shopping, after all she never knew him. And the family motto always was live and let die…

Martini Bond, written by Lyndsey Jones and directed by Helen Niland, was one of the best-selling shows at the 2012 Camden Fringe Festival before transferring to The Broadway theatre, Barking, London.

Watch A Special Trailer for
Martini Bond: Her hunt for the spy who loved her mum
(featuring Lindsey herself) [HERE]