Anorexia nervosa was a little-known disorder during Carpenter's life, but her death brought it lasting media attention. Performing alongside her brother Richard as half of the Carpenters duo, she had become a successful pop singer in the 1970s. Behind the scenes, however, her obsessive dieting and extreme weight fluctuations took a toll on her health, straining her heart. She succumbed to a heart attack at the age of 32. 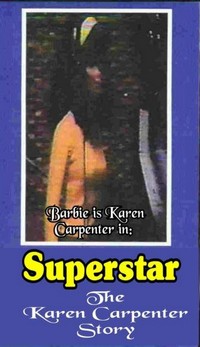 Superstar: The Karen Carpenter Story is a 43-minute film about the life of Karen Carpenter. It was directed by Todd Haynes and released in 1987. It was withdrawn from circulation in 1990 after Haynes lost a copyright infringement lawsuit filed by Karen's brother and musical collaborator, Richard Carpenter. The title of the film is derived from "Superstar", their 1971 hit song.

Over the years, it has developed into a cult film and features into the Entertainment Weekly's 2003 list of top 50 cult movies. [wikipedia]