I enjoy visiting those sites that have the dubious distinction of having been included in BlogDogIt's "In The Spotlight" section. After all, it is because these sites "strike a chord" with yours truly that they have been singled out in the first place. I sincerely hope that you too enjoy visiting these folks and keep BlogDogIt in mind as your gateway to unique, entertaining and informative content culled from the internet at large and our friends in particular.

Case in point: presented here is a featured post from our recently spotlit friends over at BuzzChomp.com. Many thanks to them for letting me run with this in exchange for my reminding you to keep an eye on them.

So without further ado, enjoy this bit-o-brilliance from The DogHouse Manifesto...

Your Gun Will Never Lick You 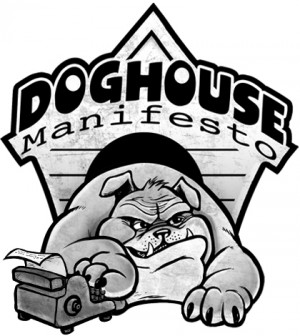 I’ll bet you’re wondering why I’m telling you this? I have a neighbor across the street named, Jack. Jack is about twenty years younger than me, is married, has a couple kids; an 11-year-old boy named, Jack Jr., and 14-year-old daughter named, Jackie, except spelled with the letter ‘Q.’ Okay, so Jack and his wife, Jacqueline, are either really self-absorbed, or not very imaginative! Speaking for myself, I don’t really care which…

So, last week Jack Sr. pays me a visit. We’re sitting in the DogHouse listening to some old school tunes; Jack’s drinking a beer, I’m having coffee, Eightball is snoozing away in his daybed, and out of the blue Jack asks,

“What kind of gun do you think I should I get for home defense?”

I swallow my coffee, and peer at Jack over my glasses. I am waiting for the punch-line. When there isn’t one, I asked him,

“Well, that depends… what do you know about guns?”

Jack shrugged his shoulders nonchalantly, drained his beer, crushed the can and feigned a sitting jump-shot from his lounge chair to my recycling bin. Eightball flinched, growled, yawned and then went back to sleep.

“What’s to know? You load it. You point it. You pull the trigger, and it goes bang! Simple, right?”

“Okay, well-let’s back up a little bit: do you know the difference between a revolver, a pistol and a rifle?”

Jack got up, opened my refrigerator, grabbed another Bud Lite, opened it and took a long swig before sitting down.

“You’re trying to trick me, aren’t you?” He laughed. “A rifle is a rifle, but a shotgun is different, and everybody knows that a revolver and a pistol are the same thing!”

I had no idea where to start!

“So, what do you think? What should I get for home defense?”

I drained the last of my coffee, ambled over to my workbench and poured myself another cup. After a sip I told him,

“I think your best home defense weapon is a dog.”

Clearly, this was not the answer Jack wanted.

“Oh, I get it… you support the 2nd Amendment, but only for yourself?” He opined sourly, as he gestured toward my gun safe, squatting like a slumbering soldier in the far corner of the garage.

I returned my lounge chair and sat down.

“Not at all.” I replied. “Look, just because something is legal and you can do it, doesn’t necessarily mean that you should.”

“I can pull my own teeth with a pliers!” I snorted. “There’s no law against it, but that doesn’t make it a good idea! Look, your idea of owning a handgun is to keep it loaded and handy, so that if someone sneaks into your home, you can shoot them, and defend your family, right?”

“What happens if the person ‘sneaking’ around your home late at night is your teenage daughter, or your son, or your wife? You’re probably not going to kill them mistakenly with your dog! After you find out why they are sneaking around the house at three in the morning you might actually want to kill them, but that’s a different story! See, as bad an idea as load, point and shoot is, you can’t mistakenly kill somebody with your family dog. Your dog is not going to go off unintentionally and blow your foot off, and though a criminal could very well take your gun away from you and hurt you with it, he probably won’t be able to kill you with your own dog! Conversely your gun will never be happy to see you. Your gun will never curl up next to you on the couch, sleep in your lap, or keep your feet warm, and your gun will never lick you.”

Jack looked down at Eightball and sighed.

And, that would be the perfect end to this story, if it ended here- but it doesn’t.

Jack and I wiped the tears from our eyes while we tried to hide our noses in our tee shirts.

I swallowed hard to keep from gagging.

“Some more than others, but more or less, yeah…” my voice trailed off.

“Okay… what kind of alarm system should I get?” He asked.