Welcome to the Ralph Account. Now in its 5th year. It's a “pulp” blog, an experiment; a broadcast of social media marketing and personal brand building. I like to promote things, I am a marketer, a story teller, a creative non-fictionalized spewer of stuff, on the topics of food, drink, fitness, entertainment and adventure. View my complete profile 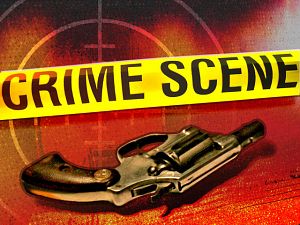 It's not every day you wake up in suburban West St. Louis County, in the middle of the night to the sound of gunshots.

That was the case last night when, out of a pretty decent slumber, I heard the first rounds.  Six in a row, back on the hill behind our house.  We have deer back there, and the first thing that I thought of was what I always feared--someone would want to take out a couple of my incredible bucks. Yes, we take ownership for them,  because they are part of our lives.  They are beautiful creatures.

This time of year the males start their rutting, and they bulk up in to pretty decent specimen's.  They keep separate from he doe's, skittish.  It's like they understand, regardless of being in the middle of suburbia, that they could be shot at any time because of their male stature.

We heard shots again, and this time they seemed closer.  While I got out of bed, I heard my wife opening and shutting the back door.  She had already gone out to take a look and try to put a stop to what was happening.  When I joined her, I noticed that she was on the phone with someone, others had heard the shots, others were calling the police and security up on Logan Universities Campus, up where the deer live.  I told her to come inside, after all, who knows whether a stray shot could make it over to the house.  We had always thought that this would happen. Nobody knew what the heck was going on.

Security said the shots sounded like they were coming adjacent to the grounds on the north side of the property, and that others had wondered if it were poaching or some other type of crime being committed.  Back inside, I was acutely aware of every sound outside my open window, the shots had subsided.  In minutes a county helicopter could be heard in the background.

As things calmed down, and with confidence that the problem had been handed over to the authorities, I wondered about how the media would respond to gunshots being fired in our little utopia of East Chesterfield.  Perhaps it wasn't deer the shooter was after, perhaps it was murder?  Who knows what happened?  It wasn't that long ago that a home invasion yielded the death of a woman up on Clayton Road.  Anything can happen now days.  Regardless of the neighborhood, we are certainly not immune to this type of thing.  I committed the rest of the night to being on guard.

While laying in bed with the gunshots still fueling my bewilderment on what had just occurred, John Carney spewed all sorts of things controversial from the the radio on the Big 550.  I am indeed a late night listener and it was obvious that I would not return to sleep.  My heart still beating from the adrenalin, a comment filtered in: ."Cardinals huge win in the 9th over the Nationals just minutes ago".  In that distance, the sounds of distant fireworks suddenly became pronounced coming from neighborhood's all throughout the county.   While my wife and I laid there laughing at what had just occurred I swore it would be the last time that I would count the Birds out in 6, ifyouknowhatimtalkinbout.