In those good old DOS days we used a device that we called a floppy disc on which we stored our computer files. It was somewhat like a hard drive only floppier. The ones we used were mostly the 5-1/4inch, Two-Sided, High-Density variety with 1.2 Megabytes capacity each. 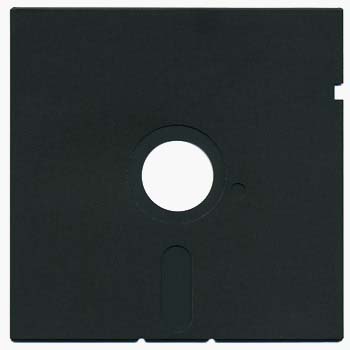 While we did access the dial-up bulletin board systems (BBSs) it was primarily via the sneakernet that files where circulated. I would collect whatever random stuff I could get ahold of and save it on my bitchin' 10 Megabyte MFM hard drive until I had enough to fill a floppy disc and these I would call "booty disks." I would duplicate and share them with my 286 posse. They where liable to contain text files, gif images and/or everything in-between.

Pretty early on in my collecting days I came upon a game written in qBasic called "NOMAD by PHLEGM GAMES." As luck would have it I had just converted to DOS v5 and had qBASIC in there waiting for me to figure out what to do with it.

At the command prompt I typed "qbasic" and a program opened on my screen that looked remarkably similar to the one that would start if I entered the command "EDIT" and it was not very long before it sunk-in that this was a programming language that was using text for commands and not that funky binary mumbo-jumbo (that nobody in their right mind could make any sense of.)

Navigating the FILE menu I was able to locate the .bas file and upon opening was greeted with the following:

Really?? Hmmm...
That is precisely what I set about doing...

The games original name was NOMAD. I made the working title of my modified version NOMAD MIKE (that was mod. #1.)

Now you need to realize that this was in a time before the internet. My only available resource for learning how to program in this language called qBasic was this code before me on the screen. I had to disect and analyze what I had and how it did what it did.

This was simply a text adventure game that would explain your circumstance and offer you several choices as to how to react or how to proceed. For example, the game begins:

You are suddenly walking down a dark alley.
From out of nowhere, a cat jumps out of the darkness, onto you.
Do you:
A. Run out of the alley to the bright street ahead.
B. Catch the cat.
C. Stab it with your knife.
D. Let it jump on you.

The code was a big old collection of IF-THEN-GOTOs and aparently when the guy (NATE I presume) got tired of programming the game he just left it with  GOTOs to nowhere. These are the spots where I would take over and see what I could do with it.

The software had quite a few bells and whistles in that it contained musical and graphic effects,  global variables and several mathmatical functions.  As I began to wrap my head around the logical nature of this programming method I was feeling a bit like some sort of evil genius and soon changed the name of MY game to MADMIKE to better reflect my mental state as I coded my way through this adventure.

MADMIKE soon became my nick on the boards. I created the pirate head logo on the right in PC Paint and that became my logo and avatar. I began tagging all my creations (batch files, text files, basic programs and booty disks) as having come from MADMIKE SOFTWARE DOODLES or M*S*D for short (which just happens to be my initials.) I would now circulate "MADMIKE's BOOTY DISKs" which contained all the best that could be crammed onto a 1.2MB floppy.

The time finally came when I ceased working on the NOMAD modification and released it direct to the public as "THE MADMIKE GAME." I duplicated a stack of 15 or 20 floppies (360K-SSSD) attached a dot-matrix printed label with glue stick. and handed them out at a local computer swap meet. (talk about a simpler time: step right up, get your free virus - right?)

After lo these many years I wish to re-release this timeless classic to an unsuspecting world wide audience:

Step right up, Get your FREE copy of:

Click the above link to download the game complete with the qBASIC executable (needed to play the game.)  Works on XP and below for sure.

If you mearly want to have a look at the code (remember it is simply a text file) open the following in notepad (or what have you) and play the game in your head: [Get The Code] - Either way... ENJOY!

Now as a bonus for sticking with this tale to the bitter end I would like to add this aside:

A few years into this facinating hobby of mine I discovered cyberspace.org (a world famous BBS operating out of Ann Arbor Michigan.) When I went to sign-up for my user account I requested the username of MADMIKE only to be informed it had been taken - bummer. So I tried M*S*D and it refused the asterisk character. So - what with third time being the charm that it is - I took my "company name" MADMIKE SOFTWARE DOODLES and went two deep into the initial letters and came up with MA+SO+DO. I took the nick of masodo and have kept that ball rolling ever since. There you go... our little secret.