Im a 43 year old quirky merry little soul with a mad sense of humor and a head full of random musings. sometimes i think too much......we shall see I love to read, im forever with my head in a book but recently thanks to much encouragement from my partner i have discovered a love of writing too. Currently working on my first novel , a fantasy story that i hope you will all love. Favourite authors include Diana Gabaldon, Barbara Erskine, Trudi Canavan, Maria V Snyder and Garth Nix but i will happily read just about anything. Currently besotted with a handsome vampire bat, ...an odd combination a panda and a vampire bat but trust me it works. Please feel free to stop by and say hello and all comments are welcome :)

Could you be a Cougar??

So what is a cougar?? 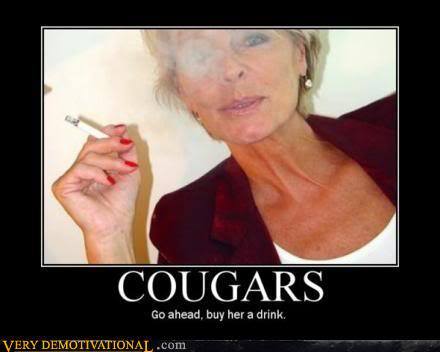 Well simply put it is any woman who pursues the attentions of considerably younger men rather than those her own age. Usually a minimum of 7 years younger is required for the age gap to fall into the cougar status. I have always dated slightly younger men, mainly due to the fact that i do not look my age and can get away with it but i have never yet reached the requirements that would fit me into this cougar category.

But could i be one??

Well this morning i admit i had rather a giggle as logging onto a diet and fitness forum i belong to i had a message alerting me to updates on threads i had replied to. Skimming the first two serious and advisory ones i picked up a few tips and added a further comment of my own. Now the third thread was entirely different and was infact a game entitled..do you think the person above is attractive. I had happily joined in the previous evening commenting that the girl at the bottom of the list was, despite being rather overweight, a very pretty girl. Considerably more entries had been added since mine and i skipped through them reading the comments and then rather absently flicked backwards looking for mine. In truth i had expected my comment to be from a girl since the boy/girl ratio was very much in the female favor but NO!!

Yes this was my comment and the commenter was…..a young lad that looked about 18! I actually choked on my coffee caught between exclamation, a giggle and the desire to swallow the contents of my mouth. The result was a spray of coffee upon my laptop followed by a mad coughing fit. Now i say this boy looked 18 he could well have been older but it would not have been much and i certainly wasn’t going to be seen checking his profile for fear of giving the wrong idea. But the comment set me thinking, could i really be a cougar?? It is not the first time i have had favourable looks from considerably younger guys infact very far from it and yes if i am honest i could have more than once dated far younger guys but yet i have not. 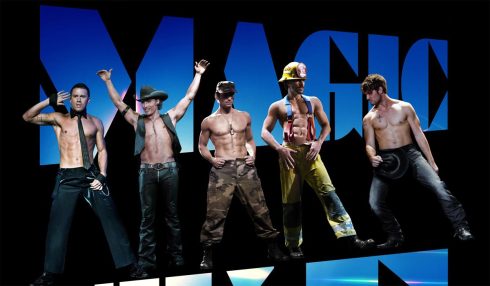 Is it not every womans dream to be seen with some young fit looking guy rather than the frequently less so older men of their own acquaintance? Would women rather wake up to some smooth tanned body rather than the slightly wrinkling version she is expected to date? Perhaps, i know many women would jump at the chance to date a younger  man, seeking maybe to hold on to their own youth in the process but strangely i do not find this appealing and in truth would feel decidedly uncomfortable waking up with a boy in my bed.Romantic moment as he leans over and whispers ”Darling i love the way the sunlight dances across your wrinkles in a morning” It has to be noted that i consider any  guy under 28 to be in the category of boy more in reference to my own age although i own they would not thank me for it. As odd as it may seem i do not really look at much younger guys and even in the cases of movie stars i remain curiously unmoved. A friend recently asked me to go and see Magic Mike with her at the cinema which for those who do not know is about male strippers. As she drooled over the bronzed muscles of the male leads i found myself looking rather dispassionately at the picture for it did not appeal to me at all and i happily declined. 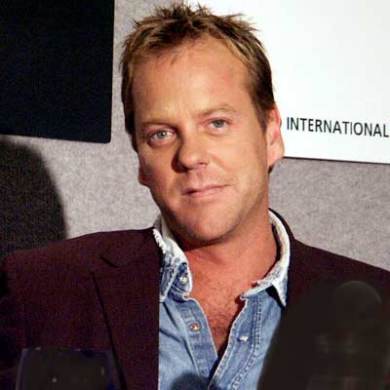 Give me Colin Firth or Kiefer Sutherland and you will happily see me melt (curiously so for both are older than i) for i prefer men who look like men and cannot see the appeal in those so much younger whom to me are just boys. It seems as i have aged my taste in men has aged with me and though i would happily date a guy a few years younger than myself i confess i am not the cougar type and have a line firmly drawn with regards to age. So whilst i may blush furiously at the comment left in regards to me i have to confess that where he would, i definitely would not.

Could i be a cougar?? No after much thought i confess not but am i alone in this? Could you?