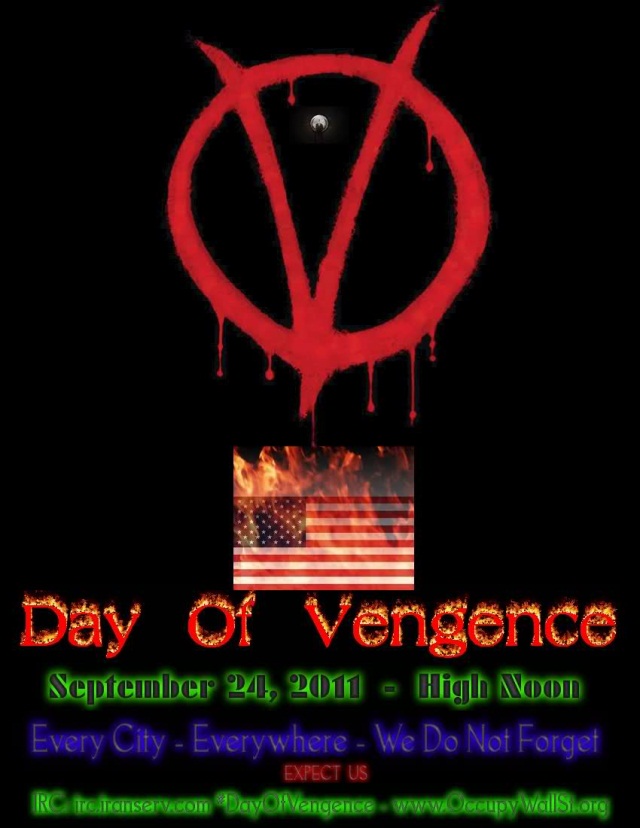 Hacktivist group Anonymous have been busy bees this year, and theyre not planning to cool down any time soon. Earlier this morning, Anonymous (or some 12-year old kid labeling himself Anonymous, who knows) issued a press release announcing that the collective and other cyber liberation groups will peacefully yet forcefully protest all over the United States.

Anonymous announced that a nationwide "Day Of Vengence" will take place in dozens of cities across the USA on September 24, 2011 at high noon. See horribly designed poster above.

In conjunction with the protests, the statement says, a series of cyber attacks against various targets including Wall Street, Corrupt Banking Institutions and the NYC Police Department will be launched.

The group suggests following Twitter account @PLF2012, which it says will publish ongoing reports throughout the day.

On September 17, 2011 approximately 15,000 peaceful demonstrators
in dozens of cities around the USA gathered, marched and occupied
public space to protest the unjust policies of the US government
and the corruption in our financial institutions. The central
protest site was in the financial district of New York City, where
peaceful protesters faced phalanxes of heavily armed paramilitary
police officers from local and federal jurisdictions. The arrests
began almost immediately, many for violating the 1845 so called
"mask" laws.

Later that day, and according to plan many of these protests
ended with a peaceful occupation of public space. Again, the
central occupation occurred in NYC. More arrests continued to take
place. All of this was expected, it is part of progressive
activism. Anonymous was content to challenge these stupid "mask"
laws in court. Not only is the Guy Fawlkes mask covered under
freedom expression as a symbol of our movement, but we believe that
everyone has a right to protest anonymously using bandanas, masks -
etc.

But then on Tuesday September 20, 2011 everything changed in a
flash of police instigated violence. As rain began to fall on the
NYC encampment, heavily armed police moved in; Removing tarps used
to cover media equipment, arresting independent journalists,
confiscating media equipment and using excessive force against
and arresting innocent peaceful protesters, several of whom were
abused and injured.

This year, we heard President Barack Obama and Secretary Hillary
Clinton say over and over in country after country from the Balkans
through the mid-east to Africa that the right to peacefully protest
and occupy public space is a right that MUST be respected in every
instance. And they are correct, and this also applies to the USA.
In fact, even more so. In the USA of all countries in the world,
the police should have been deployed to PROTECT the protesters -
not a giant brass bull that is the ultimate symbol of greed and
corruption in America. And yet we were treated to the grotesque
picture of dozens of armored police surrounding this brass bull,
while thousands more police were deployed solely to harass, arrest -
and abuse peaceful protesters. 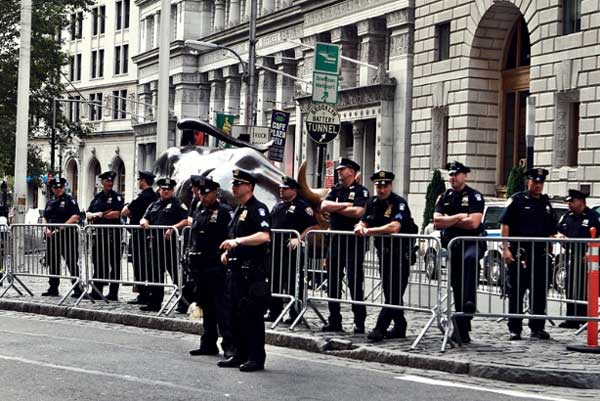 Anonymous & the other cyber liberation groups around the world
together with all the freedom loving people in the USA will NOT
stand for this. We will peacefully yet forcefully resist the abuses
of the NYC Police Department. And so Anonymous announces a
nationwide "Day Of Vengence" to take place in dozens of cities
across the USA on Saturday - September 24, 2011 at High Noon.

In coordination with these protests across the USA on September
24th, Anonymous and other cyber liberation groups will launch a
series of cyber attacks against various targets including Wall
Street, Corrupt Banking Institutions and the NYC Police
Department. We encourage the media to follow the Twitter feed
@PLF2012 for ongoing reports throughout the day.