Over the last several months, SpaceX has been hard at work preparing for our next flight; a mission designed to demonstrate that a privately-developed space transportation system can deliver cargo to and from the International Space Station (ISS). NASA has given us a Nov. 30, 2011 launch date, which should be followed nine days later by Dragon berthing at the ISS.

NASA has agreed in principle to allow SpaceX to combine all of the tests and demonstration activities that we originally proposed as two separate missions (COTS Demo 2 and COTS Demo 3) into a single mission. Furthermore, SpaceX plans to carry additional payloads aboard the Falcon 9's second stage which will deploy after Dragon separates and is well on its way to the ISS.  NASA will grant formal approval for the combined COTS missions pending resolution of any potential risks associated with these secondary payloads. Our team continues to work closely with NASA to resolve all questions and concerns.

This next mission represents a huge milestone not only for SpaceX, but also for NASA and the US space program. When the astronauts stationed on the ISS open the hatch and enter the Dragon spacecraft for the first time, it will mark the beginning of a new era in space travel.

Through continued private-public partnerships like the one that helped develop the Falcon 9 and Dragon system, commercial companies will transform the way we access space.  Together, government and the private sector can simultaneously increase the reliability, safety and frequency of space travel, while greatly reducing the costs.

The update below highlights our recent progress towards the combined C2/C3 mission and missions beyond. From the 1,500 team members here at SpaceX, thank you for your continued support, and for joining us in this exciting, vital adventure.

This week, we successfully completed a wet dress rehearsal (WDR) for the Falcon 9 Flight 3 launch vehicle at Space Launch Complex 40, Cape Canaveral, Florida.  The WDR is a significant test during which we load propellant into the vehicle and perform all operations just as we would on launch day right down to T-1 seconds, at which point we abort and detank the propellant. 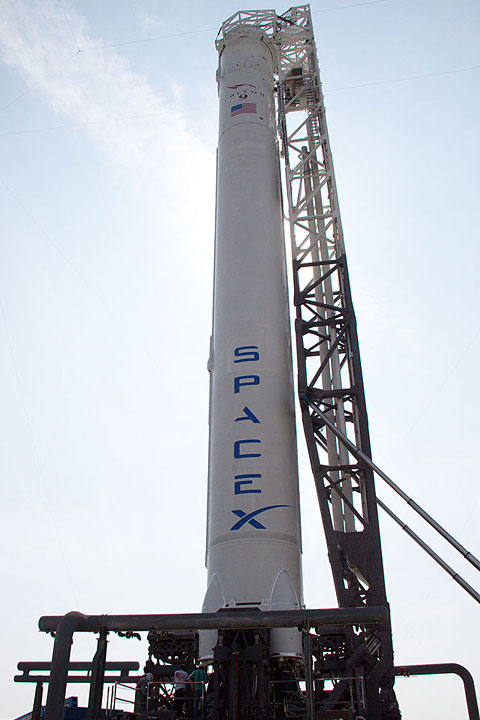 Since our last flight, we have made significant upgrades to the launch pad to streamline the countdown.  For example, we installed new liquid oxygen (LOX) pumps that reduced our previous loading time from 90 minutes to under 30.  Improvements like this are getting us closer to our long term goal of Falcon 9 going from hangar to liftoff in under an hour.  This is no easy task for a vehicle with about the same takeoff weight as a fully loaded Boeing 747, but if a 747 can do it reliably day after day, then Falcon 9 can too. 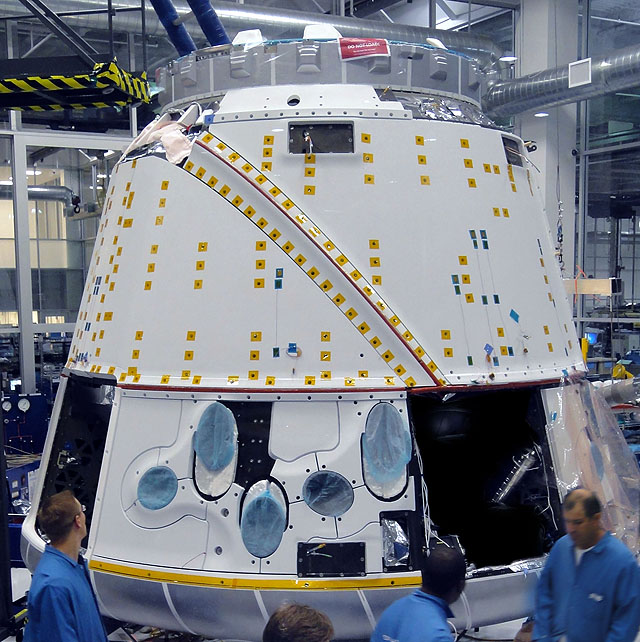 In a SpaceX clean room shown above in Hawthorne (Los Angeles) California, technicians prepare the Dragon spacecraft for thermal vacuum chamber testing. The open bays will hold the parachutes. NASA has given us a launch date of Nov 30, 2011 for Falcon 9 Flight 3, which will send a Dragon spacecraft to the International Space Station (ISS) as part of NASA's Commercial Orbital Transportation Services program. 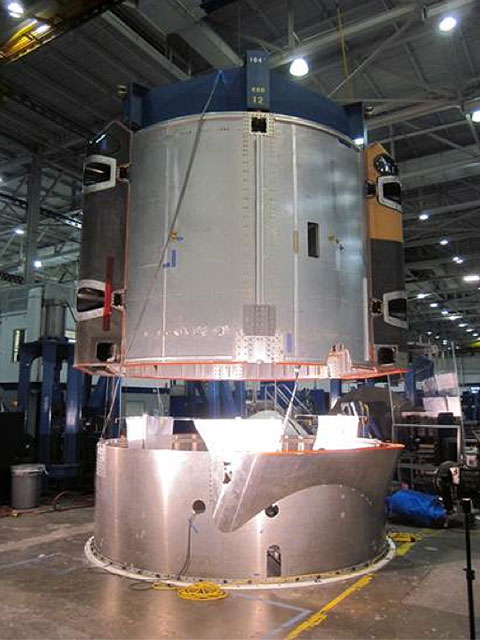 Also in Hawthorne, we have conducted separation tests of the Dragon trunk from the Falcon 9 second stage (shown above). Release mechanisms hold the trunk (top, with solar panel covers on left and right sides) to the stage (bottom). When activated, springs on the Falcon 9 push against the Dragon trunk. The trunk separates and the test fixture's counterbalance system raises the spacecraft up and away. 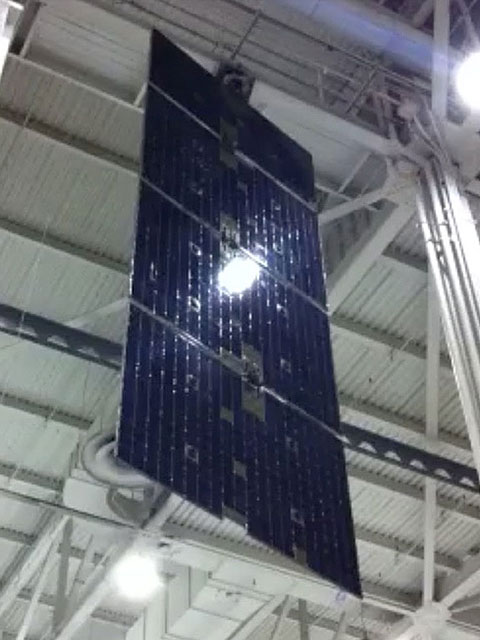 In the Hawthorne factory high bay, we tested the Dragon solar array rotary actuator by hanging the full array from the ceiling. The actuator (top center) turns the entire array. In flight, the solar panels will track the sun for maximum energy capture. 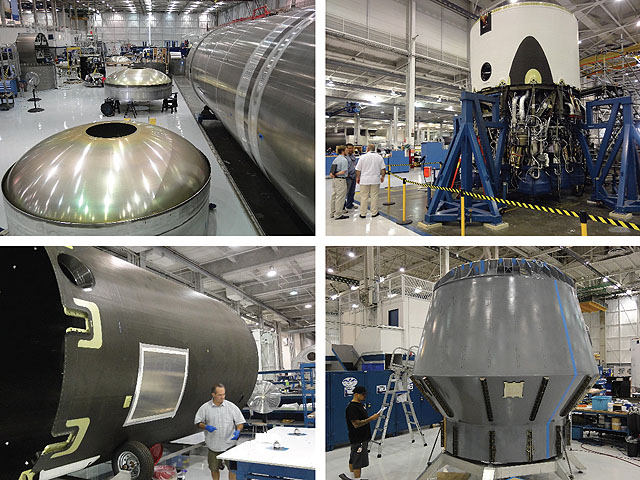 Clockwise from upper left: First stage tank, with domes and barrels for the second stage;  all nine Merlin engines have been individually tested in Texas and then returned to California for integration into the thrust assembly; the pressure vessel for the CRS-1 Dragon spacecraft has 10 cubic meters (350 cu ft) of interior volume; composite interstage structure that joins the stages.  Photos: Roger Gilbertson / SpaceX

We are well into production with all parts (shown above) for the following launch, Falcon 9 Flight 4 and its Dragon CRS-1 spacecraft, which should be the first commercial cargo resupply mission under NASA Commercial Resupply Services (CRS) program.  Significant additional tooling and automation with be added to the factory, as we build towards the capability of producing a Falcon 9 first stage or Falcon Heavy side booster every week and an upper stage every two weeks.  Depending on demand, Dragon production is planned for a rate of one every six to eight weeks. 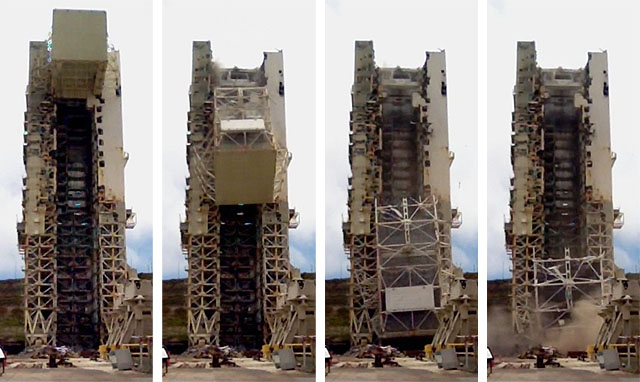 Demolition work continues at Space Launch Complex 4 East, our new launch site at Vandenberg Air Force Base on the central coast of California. Recently, the crew dropped the big "hammerhead" overhanging structure from the legacy Titan IV Mobile Service Tower (sequence above). Removing the tower is a major step in upgrading the pad for Falcon 9 and Falcon Heavy launches. We are targeting late 2012 to bring Falcon Heavy to Vandenberg for vehicle to pad integration tests and 2013 for liftoff.  Falcon Heavy will be the most powerful rocket in the world.

Stay tuned for more updates on the combined COTS-2 and COTS-3 mission to the ISS, slated for launch on Nov 30, 2011.