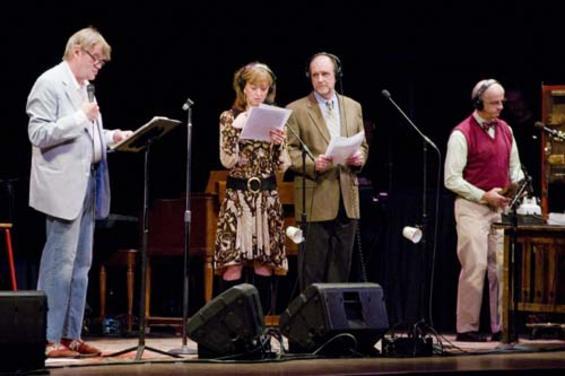 After making it through the holidays and into the new year I find myself compelled to contribute to BlogDogIt. Today I sit in my humble home, in the throws of winter. Ten degrees and snow all around; I think what is needed here is something to warm the spirit.

It was several years ago while vacationing in Ely Minnesota and adrift on a lake in a small boat - I was fishing for crappie but the biggest catch of the day was hooked with the antenna on the radio. That was the day I first discovered Garrison Keillor and his radio program named "A Prairie Home Companion."

At the time I was a big fan of talk radio and lamented the fact that there where no variety radio programs like those of the good ol' days. The discovery of this program was nothing short of a eureka moment. In fact - in terms of a fishing analogy - it was I whom was hooked on that day.

Returning home I was pleased to find several LPs in the collection of our public library. I borrowed them all and dubbed them to cassette tape. Of course that was in the days before the internet as we know it today.

The purpose of this post is to let you know about the gold mine of entertainment that awaits on the internet over at http://prairiehome.publicradio.org A Prairie Home Companion web site. Be sure to check out the archives there; you will find recordings of practically every PHC broadcast available for your listening pleasure.

I have made available a single episode for you to listen to today. (with apologies to PublicRadio.org)

Lets break the bonds of winter and get away with A Prairie Home Companion - from September 16, 1985 -
This show comes to us from Honolulu, Hawaii.

From Wikipedia, the free encyclopedia

A Prairie Home Companion is a live radio variety show created and hosted by Garrison Keillor. The show runs on Saturdays from 5 to 7 p.m. Central Time, and usually originates from the Fitzgerald Theater in Saint Paul, Minnesota, although it is frequently taken on the road. A Prairie Home Companion is known for its musical guests, especially folk and traditional musicians, tongue-in-cheek radio drama, and Keillor's storytelling segment, "News from Lake Wobegon".

It is produced by Prairie Home Productions and distributed by American Public Media, and is most often heard on public radio stations in the United States. The show has a long history, existing in a similar form as far back as 1974, and borrowing the name from a radio program in existence in 1969. It was named after the Prairie Home Cemetery in Moorhead, Minnesota, next to Concordia College.